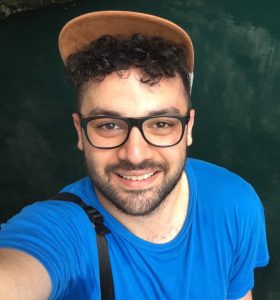 Note from the editor: Aziz left the group in 2022 (LinkedIn profile)

He received his bachelor degree from the mathematics department of Mimar Sinan Fine Arts University, Istanbul. As the final project of the bachelor degree, he worked on symmetry group calculations for Archimedean and Platonic solids under the advisement of Prof. Dr. Ayse Berkman. For this project, first he studied symmetry groups in mathematics and their applications in arts such as geometric patterns of Alhambra Palace, Spain.

After his bachelor degree, Aziz moved to the UK for short term where he also took two applied mathematics courses; ring theory and differential geometry, at the University of Sussex.

For master degree, he enrolled to Computational Sciences and Engineering master program at Bogazici University, Istanbul. In his thesis, Aziz worked on a data collection tool for ligand centric protein interaction data. He also worked on the ligand centric network model of sphingolipid metabolism playing crucial roles in the treatment of cancer and neurodegenerative disorders.

After the master degree, Aziz moved to Jena (2017) to work as a member of Prof. Steinbeck’s research group. As the member of the team, he works on mathematical chemoinformatics and its applications to contribute to the team with his mathematics and chemo-bioinformatics background. His PhD research topic is molecular structure generators, key components of computer-assisted structure elucidation suites. He developed two open-source molecular structure generators, maygen and surge. Molgen was the de-facto gold standard in the field for decades. Maygen is just 3 times slower than molgen and surge is approximately 100 times faster than molgen; therefore, surge is the fastest chemical graph generator. As a mathematician, he works on algorithmic group theory and algorithmic graph theory with the implementations in chemistry. Molecules are chemical graphs and molecular structure generation is considered as a case study of graph generation problem. His current works and all his algorithms are explained in more details on his GitHub page.

Besides his academic career, Aziz is interested in different kind of arts such as designing, filming, and a lot more. He worked for Istanbul Design Center as a coordinator assistant for a project about geometric patterns and their analysis, which was also part of his bachelor final project. He is also a producer of a documentary about Assyrian people living a city called Mardin, Turkiye. The documentary is called Mountain of Servants and received many awards from American and European film festivals. The film was screened also at Embassy of France, Washington.

Note from the editor: Aziz left the group in 2022 (LinkedIn profile)