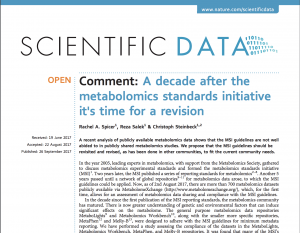 Rachel Spicer in my group in Cambridge has published an article in Nature Scientific Data on the compliance with minimum information guidelines in public metabolomics repositories.

This site uses Akismet to reduce spam. Learn how your comment data is processed.